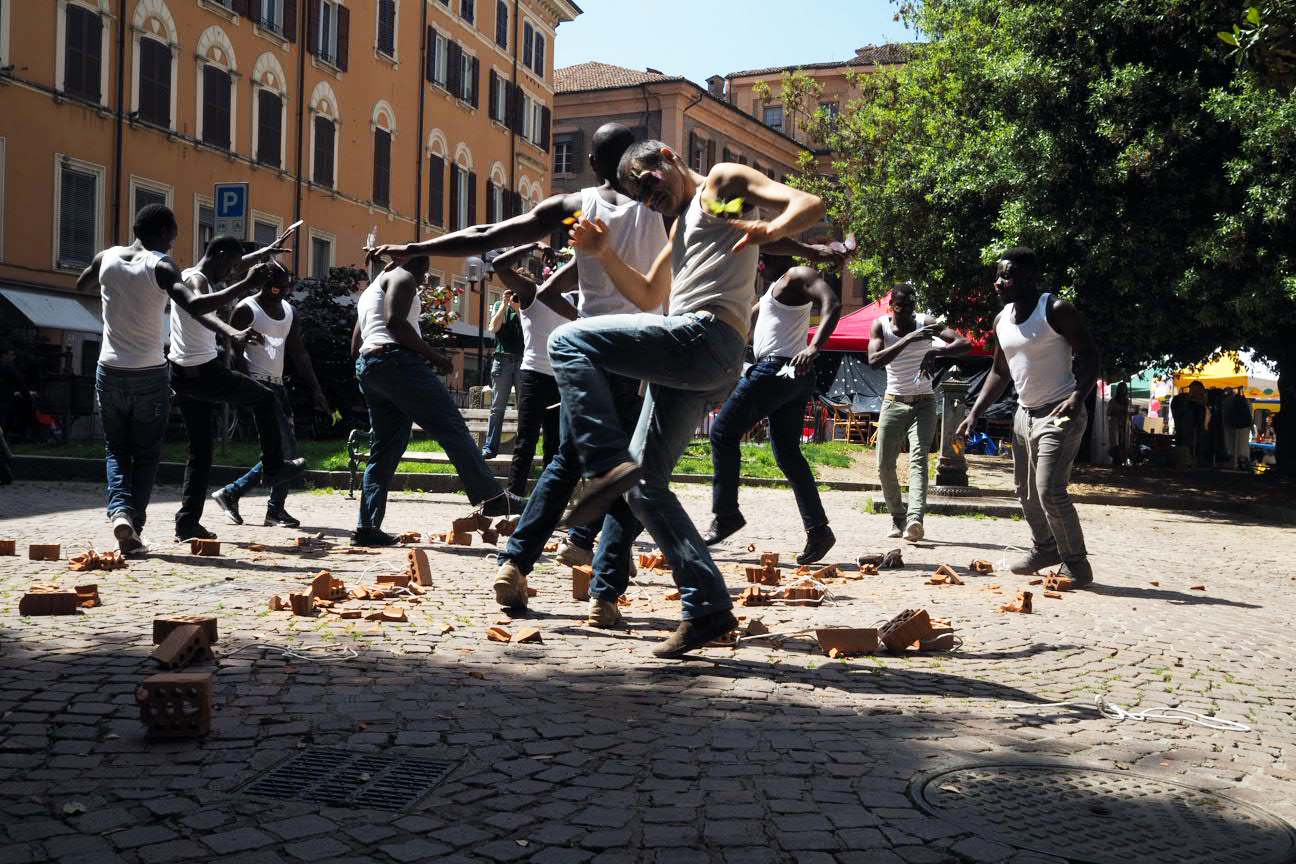 Video by Raffaele Manco – voice over by Vittorio Continelli from “Discorso sul Mito”.

The project was born during Trasparenze Festival 2017. The festival asked TeatrInGestAzione to prepare a performance with the Marewa group, composed by migrants, seeking asylum and refugees (belonging all to “Mare Nostrum”, a social project held by a local NGO).
Trasparenze Festival called us while we were following on social media, the developments and the fate of “Civil march for Aleppo”, a civil march for peace, from Berlin to Aleppo, proceeding on the so-called “refugee route”, but to the opposite direction. An independent initiative started by people who do not represent any organisation or political party, but citizens who together decided to launch an appeal to action, and to act rather than to wait.
A clear image then appeared while we were preparing to meet the Marewa group: a moving wall, embedded, grafted in the feet, dragged by bodies that walking can mark new boundaries. A march to cancel the sense of separation, of negation, of limitation that a wall figures.
In people’s minds, a wall is rooted to the ground, stationary, impossible, to be torn down, bypassed, or overcome, extended in length and height, beyond, imposing. Its image immediately gives us the perception of a certain weight, the same of a solid matter, as certain dull prejudges built on the sneaky fears.
Therefore, the work aims to transform the wall into the living and changeable material, in a dancing body. The bodies of the exiles dress bricks, which merge with the memory of their migration journey. They cross the city in a silent parade, accompanied by the tinkle of dragged blocks, which reminds of horses and chains, evoking that New World that enslaved Africans. The faces are covered with gaudy butterflies, softly placed between the sweat, the folds of the skin and the grimaces of heaviness. The landfall is in the square, under the midday sun, where the bodies are preparing for the last trip, dancing on the rubble.
Footloose is a ritual act, a cathartic journey. The spectators who follow the march contribute to the making of the image of a crowd that cuts through the city. After having walked, the spectator experiences the body that wants to be the “Other” that dances. And this “Other” is the foreigner of whom we are afraid.

Footloose is a moving-image word. A triggering firelighter. It resounds through the main streets of the city, makes its way through the Sunday’s clothes, slips down and explodes. It is a dramatic action that invites us to walk, to cross over, to risk because nowhere we are safe because we are the wandering bomb, the wall that collapses, the escape, the storm in the open sea, the foreign tongue, the earth, the earth! Land of passage, because there is no more home to return to, but a new humanity shouting of “let’s dance!”.
The title is borrowed from the musical film “Footloose” which tells the attempt of integration of a young boy from Chicago, who moved to a small town. At Beaumont, Ren is seen as a threat, but he will kick off a revolution.
This “80s American flick” animated our adolescence as small-town young people. He left us the desire for rebirth and a soundtrack that still has the power to unleash a dancing revolution. Despite its youthful plot, strong images emerge as bonfires of banished books, citizens’ committees who improvise themselves as Avengers, advocating “the public health”.
The film takes us back to the current condition that migrants live in our cities. The film takes us back to the present situation that migrants live in our cities. The blames that “small bourgeoises” of Beaumont address to Ben, the young foreigner – a dangerous corrupter of manners, a potential criminal – are not so far from the lapidary sentences that feed our “Pogrom 3.0”. The refugees are perceived as invaders, usurpers, barbarians, dangerous, violent, wild animals, indomitable, voted who knows to what devil.
Blinded by fear, nourished by the media poison, the stranger is whom we chose as our enemy, the cause of all evil and we are voted to his suppression.
With our Footloose, we want to release energy capable of reversing this thought; power that generates an unknown irresistible force, able to join the bodies, in a new encounter, devoted to desire and no longer to the fear. On the eve of the meeting with the Marewa group, the Footloose started to champ at the bit.