The research for the main part, without premise, excessively, without

imposture, respecting the continual posture of the being.

Without speaking about state of grace, but the art allows this unique, 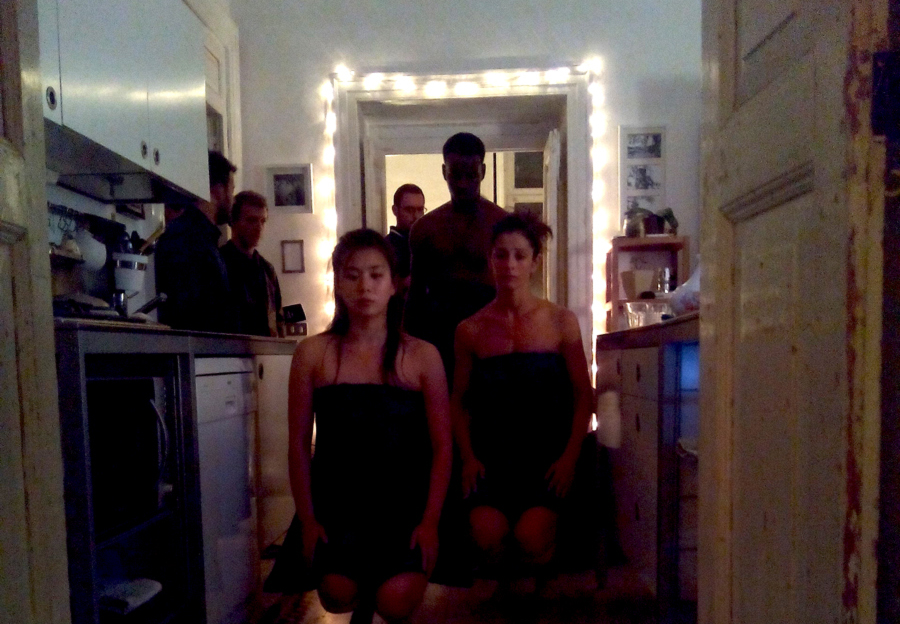 Confuse the alive and statics, the human being and the productive

robotization, the pictorial work and the alive work, question a

spectacular mode. The live performance can be quantified, can

qualified in certain motionless works where compared with the

perfection of a broadcast system, an alive appearance crossing the

of king crimson, carried(worn) in light motive for the bass player and

with for constraint the musical perfection, to move forward constantly,

movement) and to throw the body on their imaginary partition.

Simonne Rizzo was born in 1983 and was introduced to the art of dancing by Maria Fendley who taught her the techniques of Jazz, Ballet and Tap. This academic encounter led to a 15-year collaboration that determined both her artistic and personal evolution.
It’s also alongside Maria Fendley that she developed her own artistic universe and created a number of dance pieces such as “Une Femme Enchantée”, “P’tet Bien” and “Un Certain Rythme”. She was awarded a medal at the Rencontres Nationales Chorégraphiques with special distinction from the jury for the music. In 2002, she was asked to create a solo performance, Shiva, for the 2nd return of the Festival In Situ in Carqueranne.
Two pieces will follow, both performed by young dancers between the ages of 10 to 20, « Une goutte d’eau dans la mer » and « S’assoir et regarder le ciel » which was awarded the gold medal as well as the Ministry of Culture Award with unanimous support at the Rencontres Nationales Chorégraphiques.
Maria Fendley was the mentor who guided her steps towards the Centre National de Danse Contemporaine d’Angers (CNDC).
In this new environment, Simonne Rizzo explores different choreographic horizons. She discovers an affinity with Hip-Hop adding a mix of virtuosity and freedom of expression to her art.
With “La danse ressemble à nos humeurs, un rien la rend imprévisible” (“Dancing is like humor, a mere nothing makes it unforeseeable”) she seeks “the other” in a liberating journey that has only just begun.
In 2010, she creates “le Jeu de l’Oeil” (“The Play of the Eye”) co-produced by the THV de Saint-Barthélémy-d’Anjou with the support of “Atone” a sound and light artist.

She has also founded 2 dance companies
– “Ridzcompagnie” in which she incorporates various contemporary artists such as sculptors and designers.
– Fizz’alis with Nicolas Gauthier, a juggler and choreographer. Together they direct a mixed-media performance with electroaccoustic and multi-instrumental musicians. They have initiated a psychedelic universe called « Quand l’amour sort de sa cage » (« When love come out of its cage »)
Rizzo also tutors an intensive hip-hop class in Toulouse.

The dance by definition, is the movement that the created human

being. The human being is every day in movement, and every day the

being modifies its space because he modifies the movement of the

human world by his movements.

The unconsciousness of each, which takes place in the ignorance of the

consequences of its acts, is associated with the paradox of the

contemporary choreographic art. It is an opening on the life working

only closed circuit. The circle of his guests in the festivities always

representation of the choreographic art of the architectural structure of

As if, the dance moved until “them” (creators-spectators) questioning

creation) while creating a space of inaccessibility.

The will is to minimize the borders between the art and the life, and to

focus on a choreographic activity dedicated to the amateurs, so of

The human being is an artist of his own life.The choreographic artist he,

codified rather than an original fragility.The human being acts in the

original. Reduce this non-original, poor artistic structure of time in

essence the presence of which is intense with regard to the

nothingness where it is held.

This imposture is put forward through ” a certain rhythm “. It is a

question of confusing the alive and the statics, because the space

between these both is really too thin.

We seem alive crossing the centuries, but look like motionless works.I

thus decide to sublimate perfectionism and the precision to compare a

perfect reading and perfect a reading. A reading by the abstraction is

broadcast by the reading of a musical score. The being throws its