According to Greek legend, Parthenope cast herself into the sea and drowned when her songs failed to entice Odysseus. Her body washed ashore at Naples, on the island of Megaride, where the Castel dell’Ovo is now located. When people from the city of Cumae settled there, they named their city Parthenope in her honor.
This concert /musical improvisation drives from the myth of Parthenope and Pergolesi’s masterpiece Stabat Mater. Music composer Tilemachos Moussas and the director Elli Papakonstantinou form a dynamic unconventional duo. The music composition fuses Pergolesi’s original music scores with industrial and jazz elements, scatting and text improvisation.
During the performance a wide range of texts about Parthenope such as Homer’s Odyssey are intertwined with baroque music and the lament of the Virgin Mary; the figure of virgin Serine, here, is in dialogue with the Virgin Mary. This music journey from antiquity to Christianity with planted texts explores sound, femininity and stereotypes. 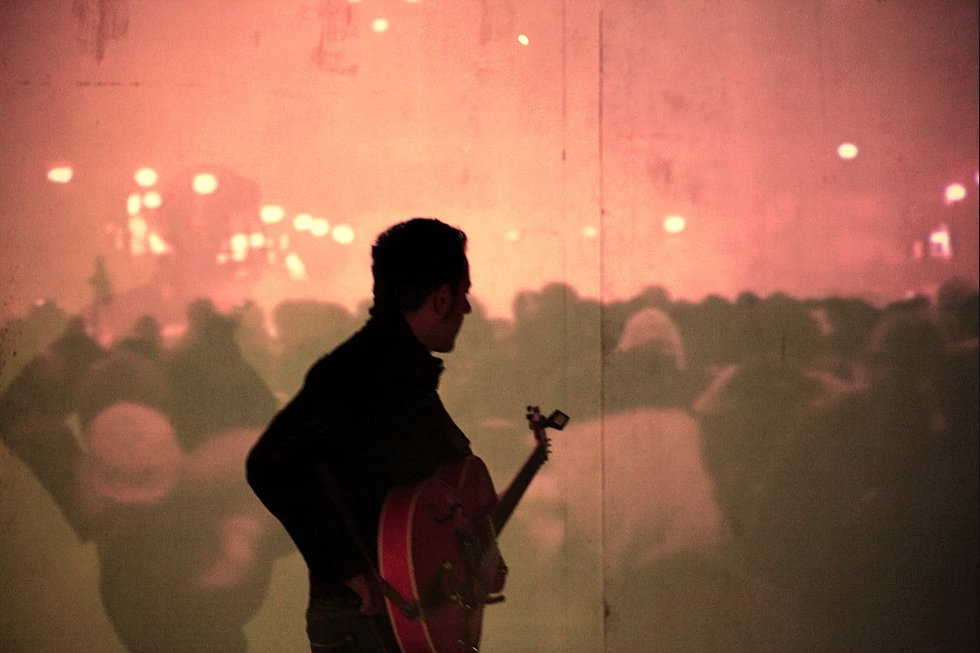 Elli is a radical artist based in Greece. She conceives, directs and co-writes multidisciplinary performances with an emphasis on musicality, new media and philosophical discourse. In the forefront of European avant-garde, her art questions traditional expectations of audience participation with a focus on active citizenship.

Elli has studied and lived in the UK for over a decade and has worked in many countries. She and has created and presented her work in places like theEdinburgh Festival, (“Edinburgh 1st award 1997”) (UK), Athens and Epidavros Festival (GR), Princeton University, (U.S.A.), Opera House Cairo (EG), LaMaMa theatre, NY, (USA), THEATERHAUS GESSNERALLEE Zurich (CH), National Theatre of Greece (GR), SGT- Onassis Foundation (GR), Inauguration Ceremony of the Bibliotheca Alexandrina (EG), Benaki Museum (GR), Bora Bora (DE), International Festival Iraq, etc.
Her last création with ODC Ensemble “Revolt Athens” toured at the Neukollner Oper Berlin (GE), Musikteatretage Festival (AU), Antic Teatre International Barcelona (SP), Hellenic Festival of Athens (GR), etc. The show is on tour. Upcoming stop is the Operadagen Festival, Rotterdam and the BE Festival (UK)
Elli is currently working on her new site-specific creation “Luisette, the backstage of a revolution” commissioned by the Hellenic Festival of Athens and Cultural Capital Eleusis21 (due to premier in June 22).

Tilemachos Moussas
Tilemachos Moussas was born in Thessalonica, Greece.
After his studies at Agostini Music School he was offered a place and a scholarship to Berklee Music School.
He has worked with many important musicians such as:
Damo Suzuki, Savina Yannatou, Blaine Reininger, Julia Kent, Pamelia Kurstin, Lena Norin, Michel Hatzigeorgiou, Missirli Ahmet, Georgia Sylleou, Thanos Anestopoulos,
and has performed with artists such as Chico Freeman, Sheila Jordan, Jerome Rothenberg .
Tilemachos and his band have played as guest in concerts for bands and musicians such as:
Anouar Brahem, Nouvelle Vague, Brendan Perry (Dead Can Dance), Ozric Tentacles, etc
Tilemachos composed the music for several plays and performances such as:
“RE-VOLT Athens” directed by Elli Papakonstantinou -“Pulsar” directed by John Britton, “Adio Adio Amore” (part of the music) choreographed by Daphnis Kokkinos Tanztheater Wuppertal Pina Bausch and many other theatre & dance performances. He has also composed the music for several films
Tilemachos has played and performed in many well known concert halls and in Festivals all over the world such as:

His cd’s “Kyknostalagma/Swan Drip” and “Newborn” has been released by Ankh records. He also works as an educator in Special Education.