A constantly-mutating action in which gestures are notes on a journey towards an undefined place, where beauty in the fruit of conquest. Cosmopolitan Beauty is the kingdom of lost things that have left a trace in the body, a contradictory space in which one becomes aware of the fragility of things, but also of their strength: an island circumscribed within itself, but at the same time oper that hosts it. 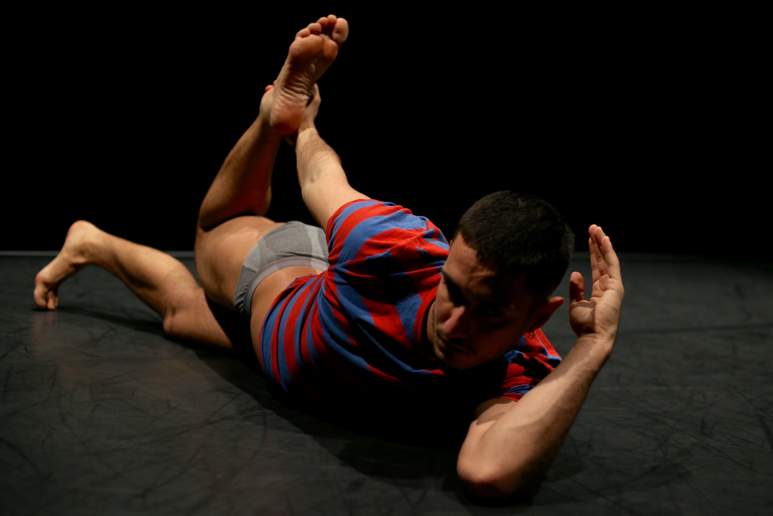 Graduated from English National Ballet, Davide studied at numerous contemporary training centers such as London Contemporary, Ramber School, Rafineri ecc. For five years he has worked steadily with Virgilio Sieni, both as a dancer and as a performer and trainer within the Accademia del Gesto. During his career he has also worked as an interpreter with visual artists and choreographers, including: Tino Sehgal, Paolo Bronstein, Ariella Vidach Laura Corradi, Paolo Mohovich, Gustavo Ramirez, Jacopo Godani, Eugenio Scigliano, Raymon Sullivan, Daniele Ninarello, Antonello Tudisco, Raphael Bianco, Pascal Touzeau, Cristina Rizzo, Fabrizio Favale.Currently engaged as a dancer in the “Cosmopolitan Beauty” project, produced by CANGO_Centro di produzione sul linguaggio del corpo e della danza and supported by the Teatro Pubblico Pugliese (selection of Anticorpi XL 2017) and in his latest “We_Pop” project, production of Festival Oriente Occidente (as associate artist) is selected at NID Platform 2017. He is also involved in the“Prove D’autore XL” project, under which he created “Whisper” for the three-year contemporary dance course of Balletto di Roma,under the artistic direction of Roberto Casarotto. Davide will soon be involved in the creation of “70.000” for the Accademia Nazionale di Danza of Rome.
http://www.associazioneculturalevan.it/