Our work is guided by speculative procedures of theoretical dissolution
by considering the potential of aesthetic experience through a parallax
interfacing of human and object, thought and matter, and imagination
and geometry. 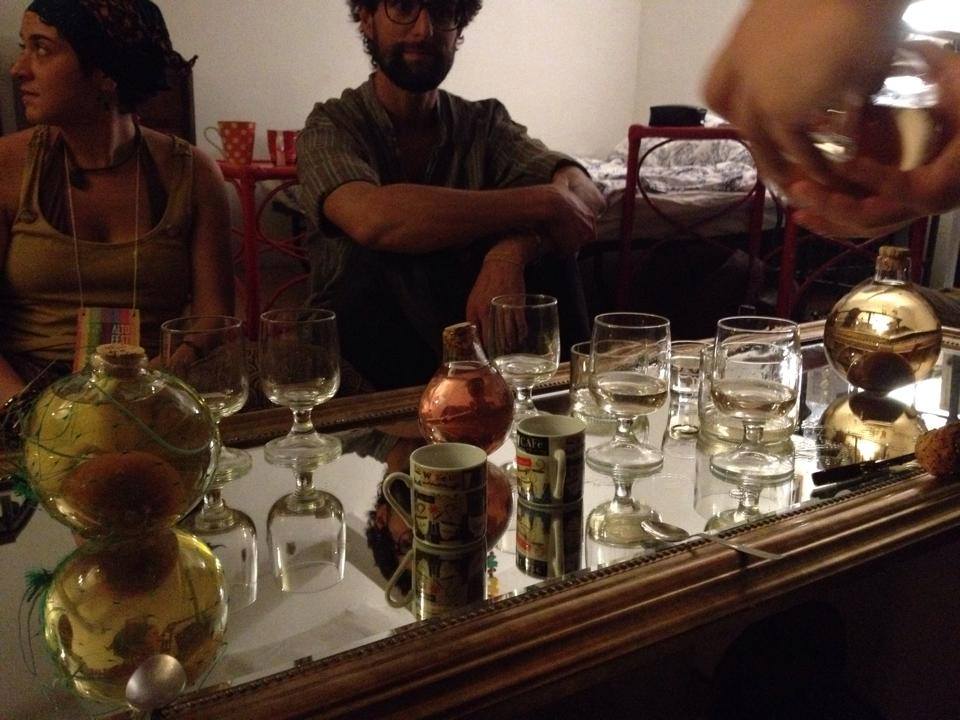 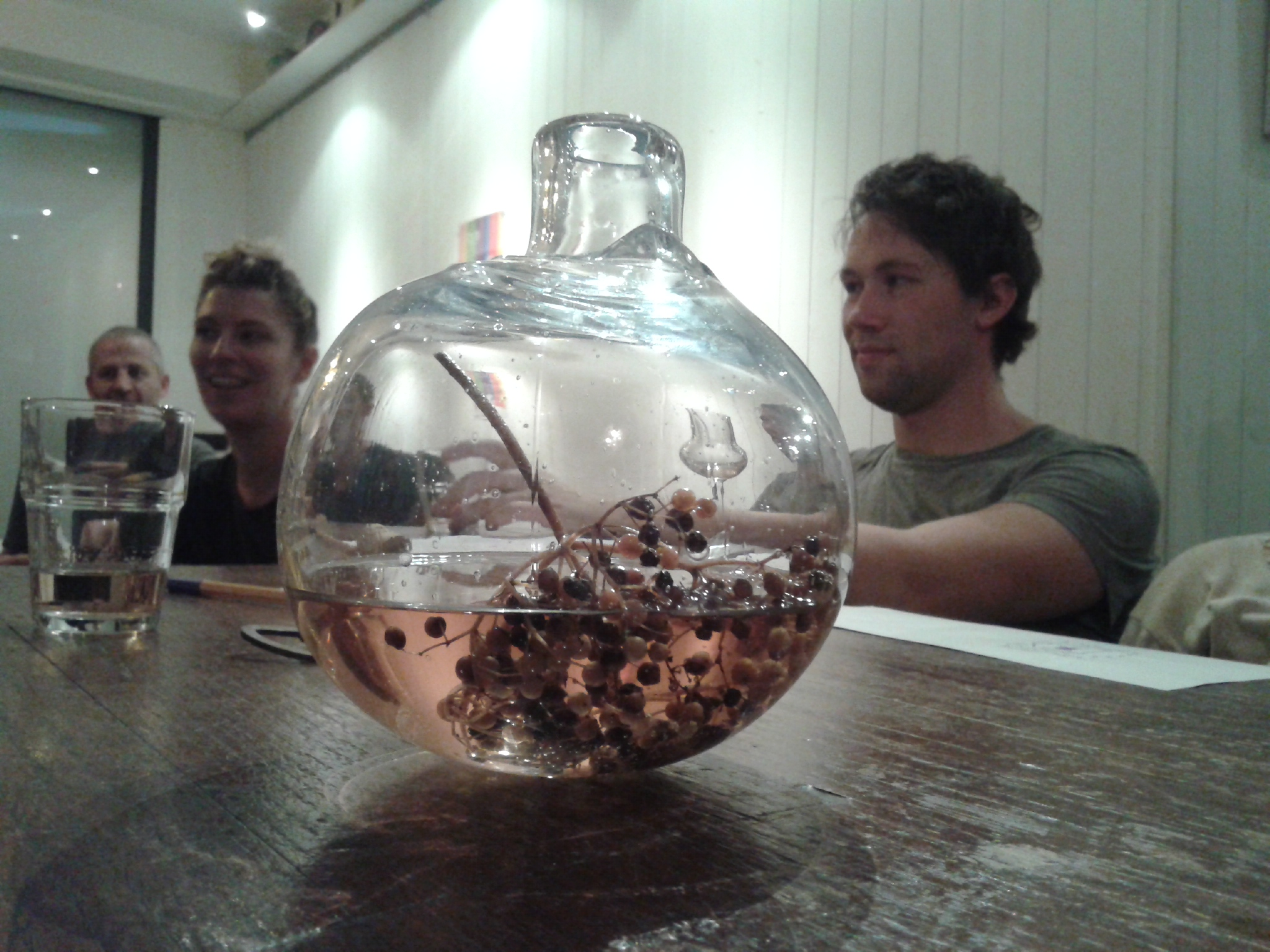 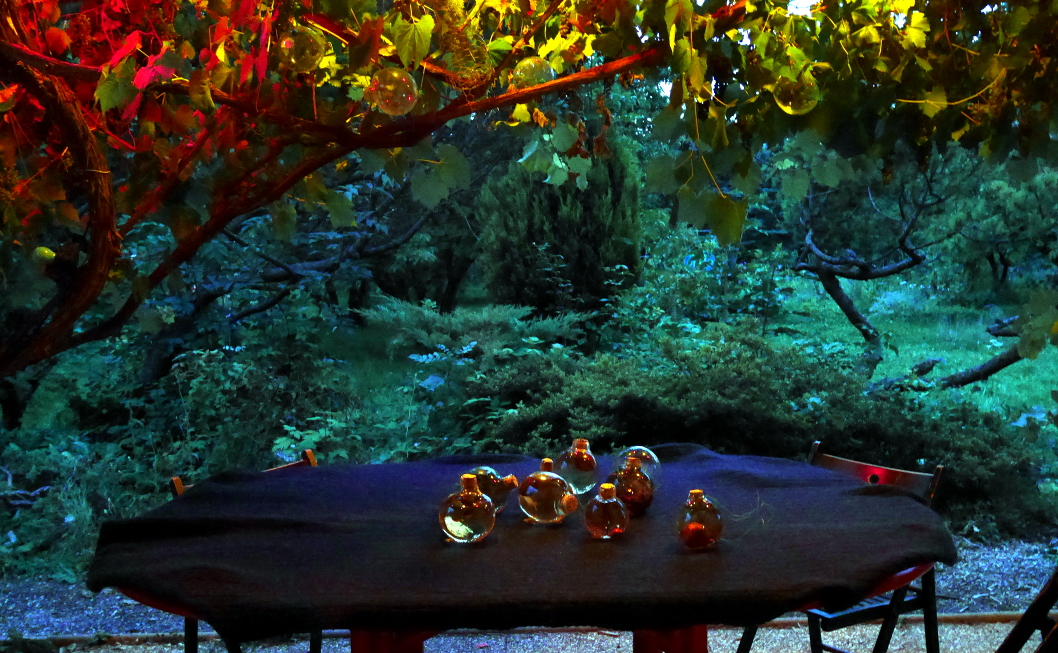 In the past months we have been cultivating 44 fruit spirits in the garden of Utopiana. However, it takes only one to set in motion the Unfailing Table. You are cordially invited to join us for Naples’ table of the righteous. To arrive there we climb down the chain of being and follow a fruit’s destiny. It will serve as a supplement in the days after and as a catalyst for toasting in the days before.

To the restoration of our personal paradise!

Take a seat and engage in new fantasies about the time after the futuristic outset. What can such a fantasy be like? Bearing in mind that realizations in fantasy are a generic form of a desire outside us, an impotent mode of wishful thinking and a loss of the principles of reality and the reality principle; we ask: What happens when there is no “other”? No world to relate to, just an eternal banquet at the Unfailing Table which is not likely to end? What then can we toast to?

Let us convene in the days after and try for a toast to unsettle our social ecology.

Björn Kühn(*1987 Ludwigshafen am Rhein/Germany) and Anna Romanenko (*1983 Moscow/Russia) have studied Fine Arts, Architecture, Cultural Studies and Theatre Directing in Hamburg, Stuttgart and London. Their work focuses on the operational capacities of things. As they construct alternative ecologies by building tools and interfaces they trigger unforeseen mechanics and consequences inducing transformation to their surroundings.

We work on devices and environments that intervene in the borderline

qualitities of our physical horizon. Their magic is fueled by the

complicity with the spirits of likeness and backed through an artistic

multitude that foresees the end of days in the near past. Our most

important experiences are those with tools, encounters with hammers,

telescopes, spoons, glasses and by extension with people. We write

handbooks on those encounters.

construct ecologies that are coined through the defiance of the human

Our particular take on space and time, as we very much agree on the

this concept has tries to make us believe. In our current work we focus

space. A grand and vage feeling of apocalypse is sneaking through our

culture. Primarily boasted by the ideas of ecology, scientific scenarios of

natural catastrophes are looming above our heads as in biblical

measurements. There is a feeling that the situation as it is cannot

endure very much longer. And an urgent need for the renegotiation

and disorganization of the hierarchies and relational ecologies of

Our praxis seeks the incompatibilities and points of fractures where

such a reorganization of spaces and timeliness might surface.